This review summaried recent progresses in the synthesis of new cellulose derivatives and graft copolymers. Cellulose derivatives synthesized in new cellulose solvents and the regioselective synthesis of cellulose derivatives have attracted increasing attention in recent years and could be a more active field for cellulose in the future. Cellulose graft copolymers with well-defined architectures synthesized by controlled/living radical polymerizations and their stimuli-induced assembly have been investigated extensively. The fabrication of functional materials with cellulosic blocks and their applications have a bright future. 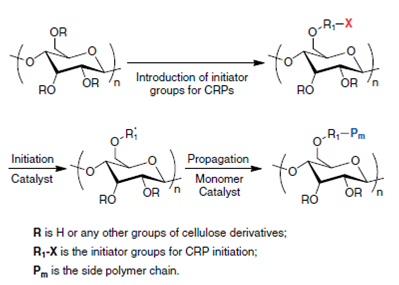 2. Synthesis of amidoxime functionalized cellulose derivatives as a reducing agent and stabilizer for preparing gold nanoparticles

Amidoxime functionalized cellulose (AOFC) derivatives have been synthesized by Michael addition between acrylonitrile and hydroxyl groups of cellulose in the homogeneous cellulose/NaOH/urea solution and the nitrile groups of CEC converted into amidoxime groups using NH2OH. The new cellulose derivative AOFC can be used as both a reducing agent and stabilizer for preparing gold nanoparticles (AuNPs). The AOFC stabilized AuNPs have the excellent stability in whole pH range, which may have the promising applications in the fields of catalysis, biotechnology and medicine.